labor US Labor Says: No War on Iran!

Our members have more in common with the working brothers and sisters abroad than with the Trump administration or any chicken-hawk politician. , United for Peace and Justice

One thing’s clear: War is an issue for the US labor movement, and we must speak out against further entrenchment of US troops in the Middle East. Who puts their lives on the line for a rich man’s war for oil and greed? Our members. Imperialist war is the banality of evil with workers at both ends. It is always poor and working people who end up paying for these interventions in suffering and loss.

After two decades of disaster in Iraq and recklessly canceling the Iranian nuclear deal, the US billionaires, Trump administration and Pentagon want to drive us into a war with Iran to continue the unending occupation in Iraq. Assassinating top Iranian government official Qassem Soleimani and Iraqi militia commander Abu Mahdi al-Muhandis, two key players in the fight to defeat ISIS, senselessly risks our country’s safety while violating international law and Iraqi sovereignty.

US Labor Against the War stands with the workers of Iran and Iraq, who will be the main casualties of this madness. We call for the immediate, unconditional withdrawal from Iraq and no catastrophic war with Iran. Our members have more in common with the working brothers and sisters abroad than with the Trump administration or any chicken-hawk politician.

Another war cannot happen. Here’s how you can plug in: 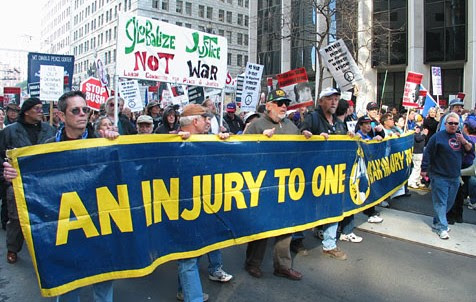 The United States is the richest country in the world—riches profited off the backs of working people, slave labor and of Native American genocide. Rather than using this wealth to improve the living conditions of working people and the health of the planet, the US Congress approved a record total of $738 billion for Trump’s Space Force and war machine.

What will strengthen the security and safety of the American people, and serve our real national interests, will be moving the funds stolen by the corporate elite behind the Pentagon and war machine toward creating stable living wage jobs. These funds can provide universal healthcare, rebuild our schools, support students instead of encumbering them with debt, rebuild the nation’s infrastructure, help homeowners and renters instead of banks, and reduce our carbon footprint by creating alternative sustainable sources of energy to slow the process of global warming. These are our demands, and this is what true security requires – not more bombs, military interventions, and sanctions that cripple entire economies.

In struggle and solidarity,