Biden criticized for his handling of situation Evacuees line up to board a C-17 aircraft in support of the Afghanistan evacuation at Hamid Karzai International Airport on Aug. 21, 2021, in Kabul, Afghanistan, Taylor Crul/U.S. Air Force via Getty Images

With the U.S. military evacuation of Afghanistan completed – bringing America’s longest war to an end – 54% of U.S. adults say the decision to withdraw troops from the country was the right one, while 42% say it was wrong, according to a Pew Research Center survey conducted Aug. 23-29. 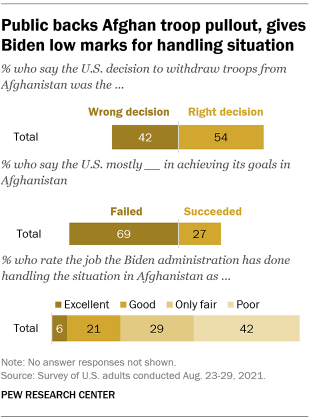 The survey, conducted before the U.S. military pullout was completed, also finds that 69% of the public says the United States mostly failed in achieving its goals in Afghanistan.

Just 7% of Republicans and Republican-leaning independents rate the administration’s performance on Afghanistan positively, and fewer than half of Democrats and Democratic leaners (43%) say it has done an excellent or good job.

How we did this

The survey was conducted as the U.S. was engaged in a massive evacuation effort to bring Americans and Afghan allies of the U.S. out of Afghanistan. Most of the survey was conducted before the Aug. 26 suicide bombing at Kabul’s international airport that killed as many as 169 Afghans and 13 U.S. service members. (The survey finds little overall change in attitudes before and after the suicide attack.) 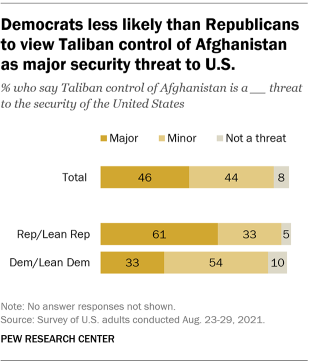 With the Taliban now in control of Afghanistan, most Americans believe the situation in that country poses a security threat to the U.S., with 46% saying Taliban control represents a major threat and another 44% saying it is a minor threat. Republicans (61%) are far more likely than Democrats (33%) to view a Taliban-controlled Afghanistan as a major security threat.

Yet there is notable agreement among members of both parties that the U.S. mostly failed in achieving its goals in Afghanistan. Nearly identical majorities of Republicans (70%) and Democrats (69%) say the U.S. failed to accomplish its goals there. 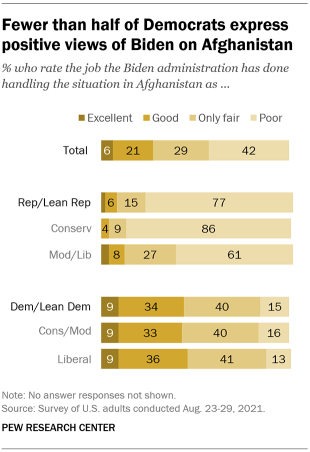 Conservative Republicans are more likely than moderate or liberal Republicans (86% vs. 61%) to rate the job the Biden administration has done as poor.

Among Democrats, there are no ideological differences in evaluations of the Biden administration’s handling of the situation in Afghanistan.

Note: Here are the questions used for the report, along with responses, and its methodology.